What language did your ancestors speak and are you sure about that?

Do I really know where I'm from and can I be sure to be German? Humans have always been hunters and gatherers and always wandered the earth. Maybe my ancestors spoke other languages than I do today. I can learn a lot with genealogy.

Languages have been a part of my life for quite some time now - one of the reasons why I saw a need for multilingual videos. My parents always spoke German, although my mother's grandparents came from Russia. German is my mother tongue and for long I had been convinced that no other language would be needed within my little universe. As a child I was always surprised when people spoke another language. English, Russian and French were quite common in Germany as those were the occupying nations after the second world war. However, the language didn't stick. Nonetheless, there still is a tendency to learn English in school as second language in the North of Germany, while for example in Rhineland-Palatinate students rather chose to learn French. In Germany, we have a "Portemonnaie" (wallet), walk on the "Trottoir" (sidewalk) and visit our friends "vis-a-vis" (face-to-face). We drive out of our "Kaff" (village) to spend some "Kies" (money) and flirt with the nice looking "Ische" (girl). At the same time we don't care what our "Sippe" (family) thinks about this and don't want to cause any "Zoff" (trouble). Does this sound like "gibberish" to you? Actually, those are words we adapted from Yiddish to German.

But why did we? Does someone just come around throwing some new words into our language soup and we carry on using them? Not really. We grow up learning the words our parents and grandparents teach us. And as humans are creatures of habit, we always use the same words. At some point a word becomes so popular that the German dictionary "Duden" agrees to it and includes it in our "official" vocabulary.

I was born in the North in the land of the Germans - so in Germany. I grew up learning German. My father is from the Southwest, beautiful Palatinate, the federal state with the best wines, and my mother is from Lower Saxony, from a small village in which people speak Low German. A German dialect that even German-mastering people don't always understand.

I always hear with conviction in the media and in my private Environment Statements like: I'm German, I'm American, I'm British, I'm Chinese, etc. And also: I don't like Germans, don't like Russians, don't like Americans, and so on... sometimes it goes even further and people talk about hate. Especially today, in times of huge streams of refugees, hatred is being fanned and nourished. Donald Trump wants to shoot the Mexicans crossing the boarder and shortly after his inauguration he wanted to enforce that people with Islamic beliefs weren't allowed to enter the country.

Considering human history, we can't really be sure to be of "pure" blood. Humans have always migrated. As a result it's quite impossible that you only have one nationality in your genes. Apart from the fact that nationalities are human made and have nothing to do with biology.

Until 1999 DNA tests had been so expensive and time-consuming that the average person couldn't afford it. In 2000 FamilyTreeDNA started offering DNA tests for a reasonable price. Since then the processing time and the precision in results have improved significantly. As more and more people are interested in their DNA, more data is collected which improves the data quality constantly. So I decided to test my DNA (more information on Wikipedia) from the company AncestryDNA. The price differs - €59 as Black Friday offer, you can find it often for €75, but regularly it costs €99, excluding shipping. My offer even included a membership for six months. With that you're able to create a family tree and find (unknown) family members. Normally, this would cost another €59. Ancestry advertises that they already have 10 million customers and therefore can rely on a huge databank. The test is supposed to show where your ancestors lived and where they migrated to.

To get you thinking you can watch a video from Momondo in cooperation with AncestryDNA. They made a beautiful video covering this subject. You'll find all relevant information here. I found it so intriguing that I had to translate it into more languages. All rights to the video belong to Momondo.

I got so excited to find out where I really come from that I couldn't wait for the testing kit to arrive. Using the kit is frankly easy. Open the tube, spit in and fill it up with the liquid included in the package, shake it up and send it back in the included package. Shipping is covered by Ancestry. Finally, you need to register your kit on their website - the number is printed on the package. Unfortunately, I didn't choose the best time for my experiment. The package needed to be sent to Ireland and would be forwarded to the USA for testing. At Christmas time the post office is constantly on edge, so the delivering took much more time than expected. Even after 4 weeks the package hadn't arrived in the US. The support asked for two more weeks of my patience, but nothing happened. After another message to the support team, they offered to send another kit if the package wouldn't arrive within the next week. And the day I wanted to ask for the replacement kit, the package arrived at Ancestry.

They indicated 6-8 weeks of processing time, but the next day they already had extracted my DNA and started the analysis which was concluded on March, 1st. Excited I read in my email that I would receive my results on March, 4th. And so, this particular Monday - which was a rainy day in Berlin - began with a lot of surprises. I woke up early and the email was in my inbox already! I was excited and calm at the same time, because the results are my DNA in the end... and I couldn't change anything about it.

So where have my ancestors been? What's my history, my genes? Who am I? Where am I from? Which journeys did my ancestors make and when and why? Which languages would they have spoken? 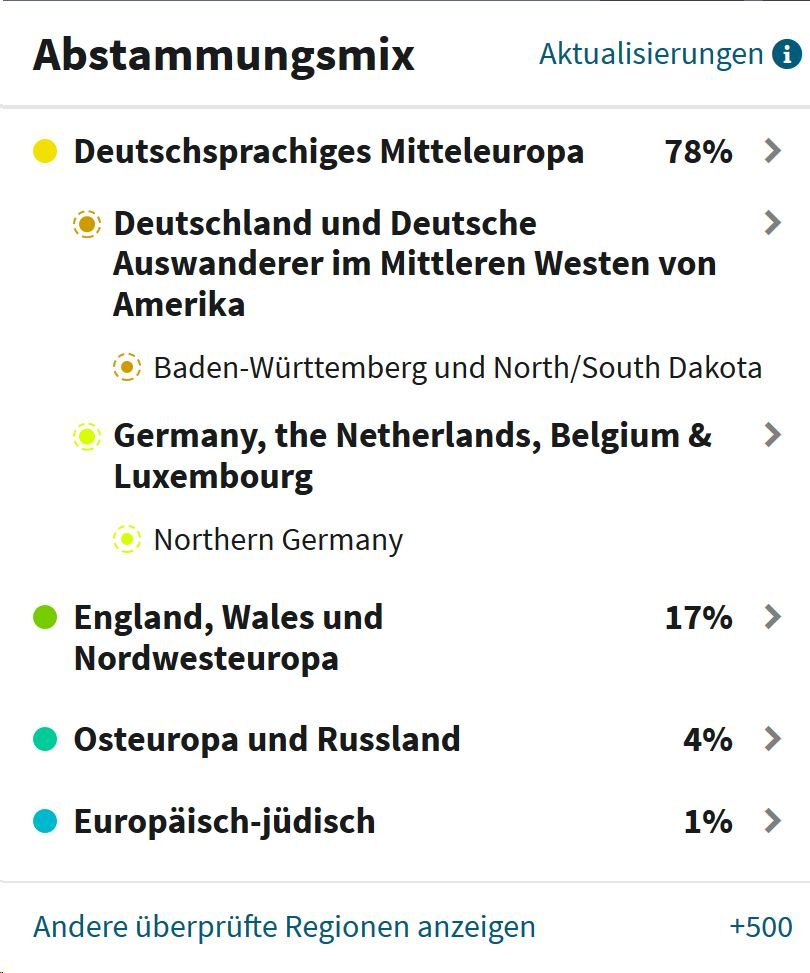 To be honest, I expected to have more Russian or Polish influences in my genes. My mother always told me about her grandparents being from Russia, so-called "Wolgadeutsche" (Volga Germans), that had migrated into Russia some generations ago. Obviously, I had made a mistake thinking that they would show Russian genes, but they never mixed with them. But also my last name "Korz" is supposed to come from the Polish name "Korzynak". However, my DNA doesn't reflect any of this. Polish and Russian is only 4%. More surprising is the fact that I really am German for the most part - 78% is a lot! 1% European-Jewish? Wow, I never expected that. What would that have meant in the NS-regime? Would I be seen as "unpure"? Would I have been pursued due to this little percentage in my genes?

My ancestors are mostly from the Southwest and North of Germany. That's interesting: my father is Palatine and my mother from the North. But there has been a long journey from some of my ancestors across the huge ocean to the West - so I'm supposed to have over 450 relatives in North/South Dakota. Really? Wow! At some point in the 17th century some of my ancestors decided to seek their fortune in the USA and settled there. Although, Germans and Brits don't like each other very much, I find that 17% of my DNA are from England/Wales and Northwest Europe (Ireland...). Exciting!

Translating this into languages, my genes speak Yiddish (Hebrew), English, Irish, Russian, Dutch, Flemish and Letzeburgian. In addition there all related dialects. Obviously, this is only an idea. On the Ancestry website I can create a family tree as mentioned above. I even get matches with people who are supposed to be somehow related with me. As I know now about my past, I'd like to know more about the present. Who are those people that have a match with me? Where do they live, which language do they speak?

Although, the website offers some tools to create your family tree, there's still a lot of work left. I have to admit that I found the interface quite frustrating. It's very complicated to switch between family branches and you never really see a "family tree", only the past from person X. My wife's family tree is separate and gives no insight. But as I'm interested in my own past, this fact is not that bad.

In the end, what's the result and can I really be sure that the results are correct? Statements are quite controversial, some say that the tests aren't of high quality and aren't reliable in their results, and that the information is even dangerous. Others say that those tests definitely deliver high quality results. The matches in my family tree were good. Some I knew already and my father and other family members confirmed other names. They were surprised that I knew those names. Naturally, the quality of the results depends highly on the number of contributors to the database and the thoroughness of their information. The more users and information the better the output. This allows a kind of "migration" of the DNA to be traced over the years and the degree of ancestry to be further refined.

I honestly don't think that this is a gimmick, but I also didn't celebrate the results with champagne. The results seem real and plausible and I'll try to contact some of my unknown family members to learn more about them. In my opinion, it was worth the money. There's much more you can do with DNA analysis, we're at the beginning. AncestryDNA is a good first step, affordable and reliable enough. I only ask myself, if they will use my DNA for other things that I don't know about.

What's left in the end? Our genes and our ancestors don't always speak the same language and still we are tightly connected to each other.