High-performance sports for the brain

Simultaneously listening, understanding and reproducing what has been said in another language, under time pressure, live in front of an audience: Simultaneous interpreting is pure stress. But it trains the brain - also for everyday life. 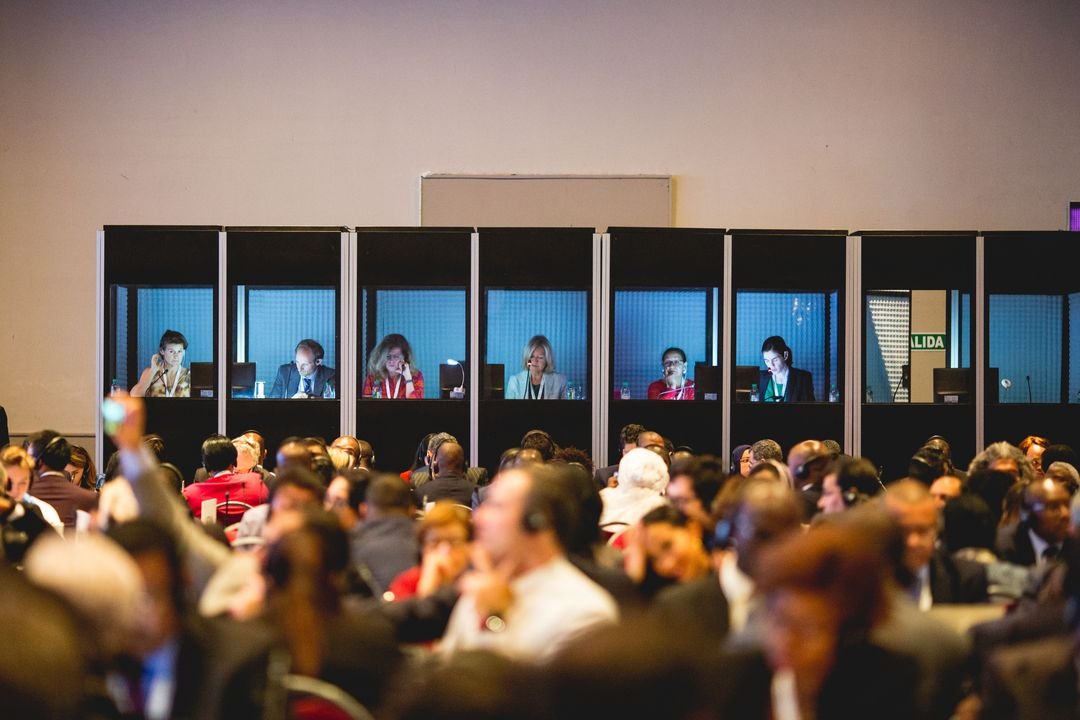 "Ladies and gentlemen, welcome to our workshop...", Bernd Leinenbach starts interpreting as soon as the first words are spoken: "Ladies and gentlemen, I would like to welcome you..." From his soundproof booth, which stands at the back wall of the plenary hall of the Bielefeld Centre for Interdisciplinary Research, he looks over the rows of participants to the speaker at the lectern. He's already lecturing on the urban planning of the future. Most of the listeners put on their headphones. They prefer to listen to Bernd Leinenbach. He is a conference interpreter. His job: to translate English and Portuguese sentences into German - while the speaker speaks.

"Simultaneous interpreting is very demanding, stress is a constant companion," explains Dörte Andres, Professor of Interpreting Science at the Department of Translation, Linguistics and Cultural Studies at the University of Mainz. At the same time hear and understand what the other person is saying, and reproduce this in another language, with a slight time lag. The whole thing under time pressure, after all, the speaker keeps on talking. And even live in front of the audience: the whole hall expects an understandable, flowing, pleasant translation. Bernd Leinenbach will last for half an hour, maybe 45 minutes. Then he has to hand it over to his colleague. Only after a half-hour break will he pick up his headset again. You don't notice the stress in his calm, well-emphasized sentences. You could listen to him for hours.

"Ideally, one understands everything that is said," explains Leinenbach. "And ideally, you are far away from the original when it comes to reproduction, you say it as you would say it in the target language. But that doesn't always work. "In an interview, Jamie Lee Curtis was mentioned as the daughter of Tony Curtis," Leinenbach says. "I remembered Tommy Lee Jones, who also has the 'Lee' in the middle and the name has a similar rhythm. I couldn't get rid of that anymore. After a much too long pause for thought of certainly one or two seconds, I simply spoke of the daughter and embezzled the name." And sometimes he just slips out a word that sounds similar but doesn't make sense. Like the earthquake-proof bunker is an earthqake-proof one.

Fast speech, dialects, allusions, jokes and identical words make the interpreters' work even more difficult. In addition, there are always niches with specialist vocabulary in which the interpreter has not yet found his way, even after many years of work. "The strangest thing was a conference on decomposition disorders in cemeteries," Leinenbach recalls. Only good preparation can help. If the day is advanced, the topic complex, the booth hot and poorly ventilated and no end of the debate in sight, even experienced interpreters will reach the edge of resilience. "I experienced it, we took turns in a discussion on every question, even after only two minutes, because we were so exhausted."

It began with the Nuremberg Trials

Probably people have been interpreting since different languages existed. The history of modern simultaneous interpreting, however, begins with the Nuremberg War Crimes Trials. Since all statements had to be translated into English, French, Russian and German, the search was on for a time-saving alternative to the previously customary consecutive translation. In this case, the interpreter waits until the speaker has finished his sentence and then translates it - which doubles the speaking time. Since then, simultaneous interpreting has largely replaced consecutive interpreting, supported by ever-improving communication technology. It is common practice at many scientific conferences and in international organizations and companies.

Bernd Leinenbach is a graduate interpreter. He studied interpreting and translation in Heidelberg and has been working as a freelance interpreter for over 20 years, focusing on business. Not every interpreter has learnt his trade at university.  "It is above all a matter of practice, practice, practice," says Leinenbach. But during your studies you learn tricks and hints to cope with difficult situations. "It's like goalkeeper training," he says. "The whole team builds up and shoots at intervals of seconds and the goalkeeper has to learn to forget the ball he can't get anymore and concentrate on the next one. So: If a word is missing, better describe it, first say "thing", if you can't think of "screw". That's not nice, but it's better than letting yourself be completely lost. In his opinion, you don't need a special talent for interpreting. He believes that listening and speaking at the same time is an innate ability that is withdrawn from us early: when others speak, you're quiet! 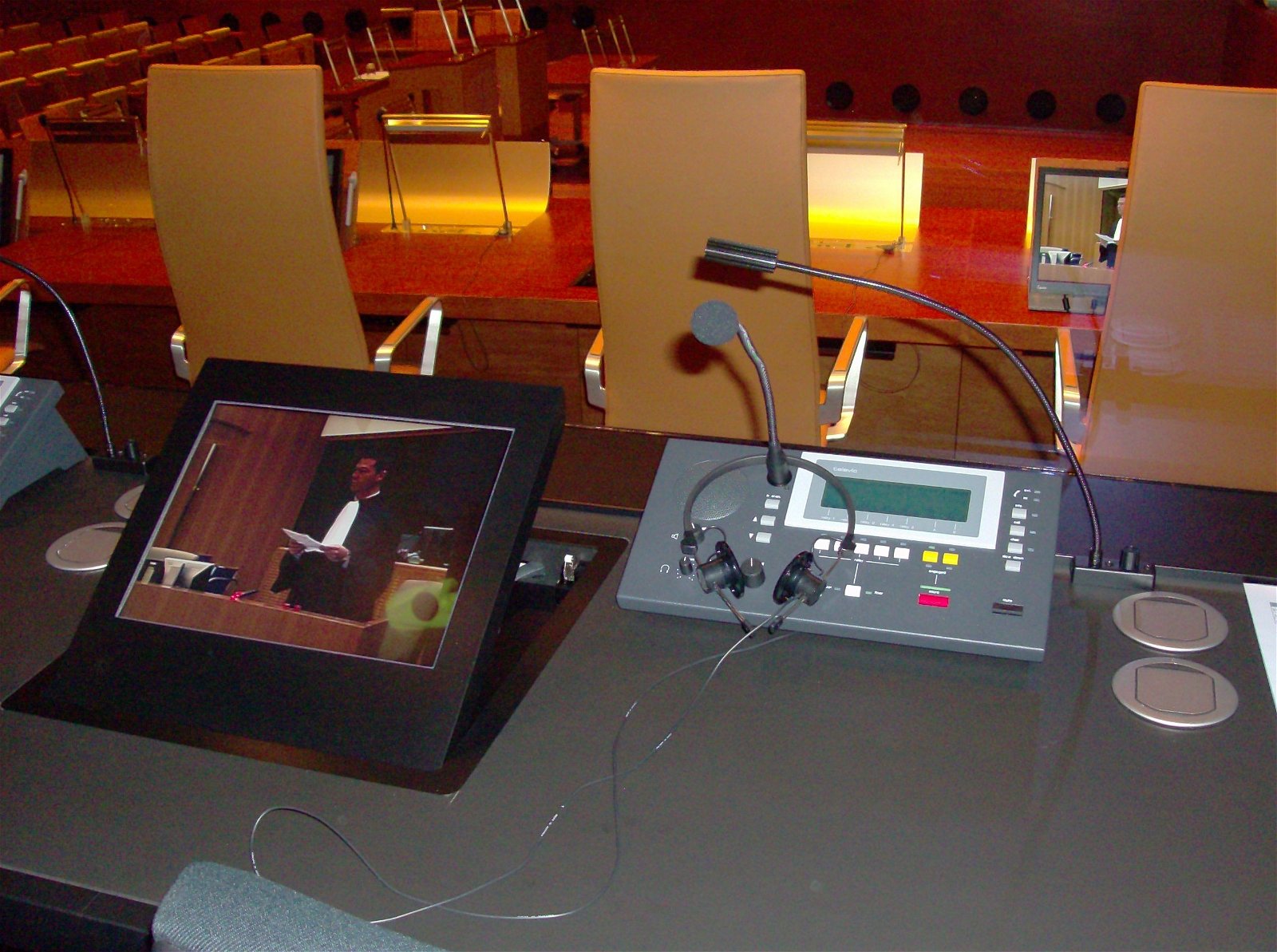 Brain researchers have long been interested in how the brain coordinates languages. Not only because it is an impressive achievement in itself to speak several languages, but also because multilingualism brings an additional benefit: it makes the mind more flexible. The researchers also have an idea why: Those who constantly have to clarify in their brain which language they use could use it to train control skills that also help them in perception, attention and action.

Simultaneous interpreting would have to be an extreme case for the brain, because the brain has to activate both languages at the same time and constantly switch between them. And that's not all: "I know interpreters who knit during work, others write special phrases, a colleague makes computer games during interpreting," reports Leinenbach. "I can't do that."

In order to track down this brilliant achievement of the brain, a team led by Barbara Moser-Mercer from the Faculty of Translation and Interpreting at the University of Geneva, together with the Brain and Language Laboratory of the University of Geneva, conducted an as yet unpublished study of the brain activity of fifty multilingual test subjects without experience in simultaneous interpreting using a brain scanner. 23 of these test subjects were enrolled in the university's Master's program in "Conference Interpreting", but had so far only interpreted consecutively. In an experiment, the test persons only had to listen to the spoken language, repeat what was said while listening or translate it simultaneously. The researchers found that, like many other cognitive services, the ability to interpret simultaneously is based on the coordinated activity of many brain regions; there is no separate brain region for interpreting.

Simultaneous interpreting activates all regions of the brain that become active during repetition, as well as some others, in particular the corpus striatum, consisting of the caudate nucleus and putamen. The first is associated with planning, the latter with the execution of actions. The Nucleus caudatus is involved in the process of converting input in one language into output in the other. The putamen, on the other hand, inhibits the language that is currently not needed. Injuries in this brain region cause multilingual people to confuse their languages. Interestingly, however, the mother tongue is generally less susceptible to disruption in the case of brain injuries - even in people who have lived abroad for a long time, for example, and have mainly spoken another language there.

The researchers are aware that they are only at the very beginning with these results. Because there is no such thing as "interpreting". "There are different strategies for interpreting," explains Dörte Andres: "For example, you translate fast speakers differently from slow ones, so you have to compress and concentrate on the core messages. In the education Andres sees the students going through different stages: while the beginner consciously tries to filter out key messages, but is often overwhelmed by the many other things he has to keep in mind at the same time, the experienced interpreter compresses more or less automatically and intuitively. This leaves cognitive freedom for other problems. The studies from Geneva confirm this: When the researchers asked some of their fifty volunteers to be scanned again after one year, the brains of 19 interpreter students who had started to train simultaneous interpreting in the meantime showed a change: The activity in the caudate nucleus had decreased during interpreting. A phenomenon known to all researchers involved in learning processes: things you master require less cognitive control.

Your brain profits from interpreting

In this test, the test subjects must sort cards that belong together without knowing the rule by which to sort. They only get feedback as to whether they are doing it right or wrong. If the test subjects have sorted ten cards correctly, the rule changes silently. This showed that simultaneous interpreters accept that the rule has changed more quickly, they have alternative hypotheses at hand more quickly and make fewer mistakes. An ability that is particularly in demand in languages such as German, where the verbs are sometimes at the back of sentences, but the interpreter cannot wait until the sentence has been completed.

In everyday life, however, the interpreter can rely not only on his trained brain but also on another helper: the cooperative principle. The listeners understand what makes sense and often supplement what is meant by themselves. "And especially with languages that are rarely interpreted, such as Portuguese, people are simply grateful," says Leinenbach.

Manuela Lenzen studied Philosophy, History and Social Sciences, and during her doctoral studies in Philosophy she came to science journalism. With Wittgenstein, she shares the opinion: "Everything that can be said can be said clearly...". She particularly appreciates learning new things about how people function and is fascinated by how body and mind come ever closer together in research. She finds her topics mainly in the fields of evolution, cognition, artificial intelligence and brain research.