The basics of baseball - a really complex sport!

The playoffs are in full swing! The first games are over but nothing is decided yet! The Tornados still have a chance to prevail against the Heidenheim Heideköpfe. But what is the general structure of the game? Learn some of the basic rules here….

The outcome of the past weekend wasn’t what the Tornados expected. They had to throw in the towel against the Heidenheim Heideköpfe twice. The first game resulted in 0:3 and the second game was won by the Heideköpfe with a score of 2:6, although they only took the lead in the eighth inning.

Baseball is a very complex sport, which relies a lot on statistics. It’s important to understand the rules in order to understand a recap of a game.

The playing field has more or less the form of a quarter circle. Start and end point on offense is the home plate, which is a firm pentagonal plastic plate. At an angle of 45° to each side, the foul lines start from this point up to the fence, bounding the playing field. The game is played counterclockwise to 1st base, 2nd base and 3rd base, which are square cushions. The three bases and the home plate form a square, in its center is the so-called pitcher’s mound. Beyond the bases 1-3 is the infield (dirt) followed by the outfield (grass) up to the fence bounding the “fair territory”. Everything beyond the fence or the foul lines is called “foul territory”. 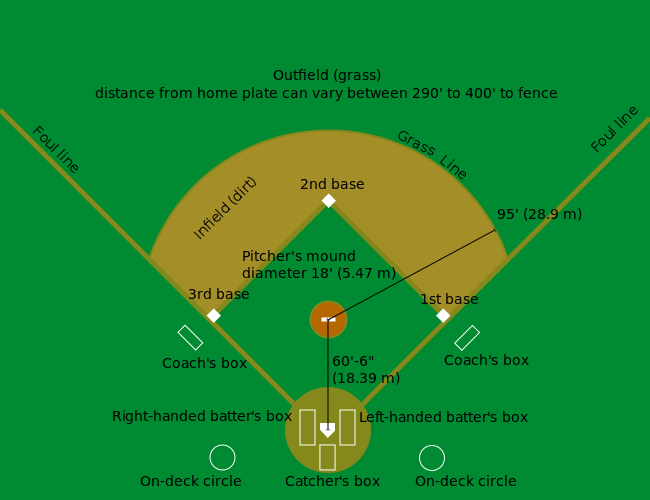 In this bat-and-ball-game two teams of 9 players each compete against each other in so-called “innings”. An inning itself is divided into two half-innings (top & bottom). In the top inning the visiting team bats first. The batting team is playing offense and the field team is playing defense. The home team bats in the second (bottom) half-inning. A game consists of nine innings.

The team on offense lets their players bat one after another against the pitcher of the team on defense. The batting order is set by the teams before the game starts and presented to the umpire. The offense will bat until 3 batters are “out”. This means, three strikes are recorded against a batter - he didn’t hit the ball at all or not correctly - to keep it simple.

As soon as the batter hits the ball correctly, he becomes a runner and has to reach the 1st base before one of the defensive field players picks up the ball from the ground (ground ball) and throws it to the first baseman. If the ball reaches the first base before the runner does, he is out. However, he is also out (fly out) if a field player catches the ball mid-air (fly ball), meaning before the ball hits the ground. In case the runner reaches the next base successfully you call it “base stealing”.

On the other side, the pitcher has to throw the ball within the “strike zone”. The strike zone is the area above the home plate, between the batter’s knees and chest. The pitcher now tries to throw the ball in such a way that the batter is not able to hit the ball at all or only slightly and therefore will get a strike. When the batter receives three strikes, he is out. If the pitcher throws the ball outside the strike zone, you call it “ball”. 4 balls mean that the batter can move to the 1st base which is called “walk”. In case there is a player on the 1st base, this player can move on to the 2nd base and so on. So if all bases are occupied this results in a point for offense, because the player on the 3rd base reaches the home plate. 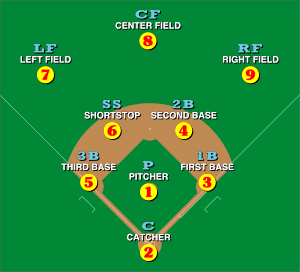 Now we know that a maximum of 4 players on offense are on the playing field at once - one batter and one player on each of the 3 bases. However, the defense has 9 players on the field as you can see in the picture above. Each player has a certain number which is important for the statistics of the game and particularly to understand moves and recaps. No. 1 is the pitcher who mainly tries to get the batter out of the game. Behind the batter is the catcher (2), who catches the balls the batter doesn’t hit. The other players (3-9) have more or less the same function - they catch the balls from the batter and return them as quickly as possible. Obviously, this is a very simplified and brief explanation of the game. I’ll get more into detail in my next posts.

Next Saturday and Sunday (Sept. 9 + 10), the Tornados are playing against the Heidenheim Heideköpfe in the playoffs. After the games of last week, we can only hope that they haven’t lost their motivation and are ready to fight against the Heideköpfe. Come to the game on Saturday at 2pm at the Roberto-Clemente Field in Mannheim and support our record champions! It’s a critical game!

Alugha wishes good luck to all of them!