One of the most important questions you should ask yourself BEFORE investing money and time in a new thing is the potential market size. If there are only a handful of customers and you can not get an ROI (return of investment), think twice before you go through with it. 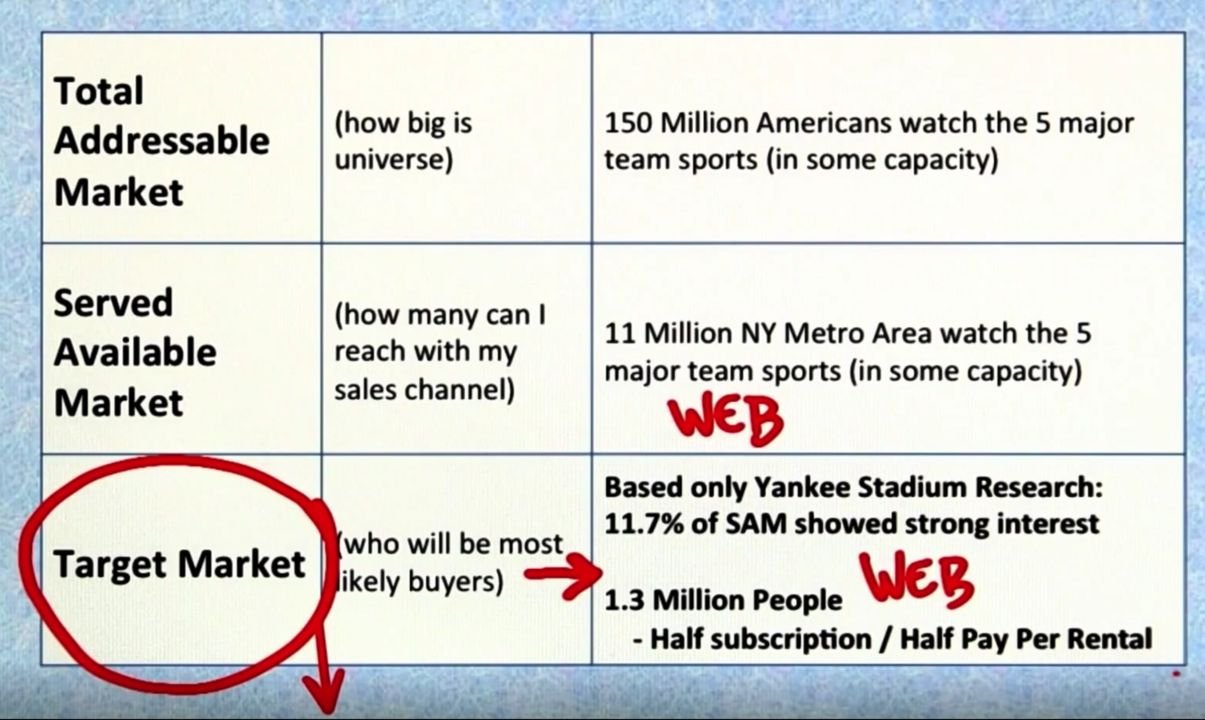 I often hear from people who want to start a startup that they have been told they need consultants, that huge charts and analyses have to be made and that you actually have to study business administration or something similar yourself to create these analyses. If you have studied anything like this … perfect. If not, then it does not matter. You do not need 500 pages of calculations, statistics, interviews or charts … A sheet of paper is enough to decide if you are on the right path or not.

Crazy? There is a well-known example of this, the "Jersey Square Paper". What's it all about? The Jersey Square team wanted to know how many people they had to reach to cover their costs. As you recall, we have already talked about the total available market. So we know how big the market we could cover theoretically is overall and how big the piece of cake would be for us. In this example, the Jersey Squares assumed that there are 150 million Americans following the 5 biggest teams in sports. It was immediately clear to them that they would not be able to reach all of them with their plans, that would be simply unrealistic. The assumption was that 11 million people in the New York metro area would be eligible.

This was the first decisive mistake they made. Since they wanted to offer apartments in which the visitors could spend the night during the games and these apartments should be offered over the Internet, one did not think how many at all of the 11 million have a web browser. It is ridiculous today, but back then only a few had the idea of getting a place to sleep over the Internet. It is simply interesting that people didn't think about how many of the target group could be reached at all. This can be adapted to many modern-day problems. E-mobility is a buzzword here. While there are not many, there are still several charging systems and if I only offer a fast charger for TESLA but all the others have a type 2 charger, I have swum past my target group.

If they had done it right, they would have thought about how many of the interested parties would have been reachable via the web browser in what time. How many of these customers would they actually reach through their advertising campaign? If this all had been taken into account, more realistic figures would have been on paper. One could have roughly estimated how much turnover would have been possible in the first, second and third year.

What do we learn from this? You should create various scenarios, go outside, do market analyses and calculate. You should discuss these calculations with other people, such as your business partners, investors, mentors, people close to the industry, etc. and gain further insights with the feedback. The consolation for you as a startup founder: Until now there has rarely been a startup that has exceeded these numbers. Often, the customers are less than planned, but that is no reason to just throw in the towel. Go back to your analysis and reconsider everything. If you come to the conclusion that it will probably not remain more than a hobby after all, then so it should be and you go forward and look for the next challenge.