Key resources are probably the most elementary resources that determine success or failure. Whether it's a warehouse, developers, patents … there are many factors involved and it's imperative for a business model to keep an eye on them. 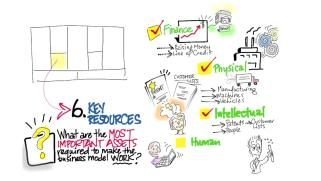 When we had the idea for our startup alugha, it was simply a video player that replaced YouTube's on their platform and had several languages ready for the audience. We were father and son and worked in our spare time and from home. We didn't think at all about key resources. I "procured" our resources by doing a daily job (back then still proudly hoTodi). A business plan was not necessary and the resources were our two laptops, which we had anyway. Years later, after getting an investor on board and adding lots of features, the world looked completely different. We first had to decide what we wanted - and in what time frame. This then resulted in what resources we needed for what purpose. Areas such as interface design, server infrastructures, marketing, patent applications were the beginning.

Over time, we hired more employees and more space was needed. At the same time, the range of features and our own aspirations increased - new developers had to be found. These in turn needed desks, chairs, computers, monitors, yes … rooms with everything in them. They had to eat, drink, use the bathroom, so we had to make sure they could do all of that as well. We continued to expand and so the premises became too small; we also needed employees from areas that were previously unthinkable. Translators, press department, voice over speakers … and again more space …

We are in the "fortunate" position of not producing goods for which we need machinery, locksmiths, oils/greases, high voltage power supplies … and many more industrial gadgets, but still we are in a constant "forward" motion as far as our key resources are concerned. The better you plan this from the beginning, the easier it will be to adjust to it. Those who know from the outset that they need a large oil pan will not first cover the floor with 30 cm of reinforced concrete in order to rip it open later. That's how all projects work. Certainly you cannot foresee everything but it is of great benefit to consider as much as possible.

Patents are a small prime example. Anyone who works on their project for a long time and makes it public - even on a smaller scale - will have great problems obtaining a patent for it. But it can get much worse if you did not think about possible patents at an early stage and only researched later, you can lose a lot of money in the end.

No matter what kind of company you want it to be: The key resources are some of the most important success factors!