Kim Song, Chair of Delegation of the Democratic People's Republic of Korea, addresses the general debate of the 74th Session of the General Assembly of the UN (New York, 24 – 30 September 2019). --------------------------- The Democratic People’s Republic of Korea (DPRK) ambassador Kim Song said, “the UN Security Council entrusted with an important mission to ensure world peace and security has been reduced into an instrument for the strategic interest of a specific country in total disregard of the international justice, thus pursuing sanctions and pressure and even the regime change against selective countries.” Speaking at the General Assembly, Permanent Representative of the DPRK today (30 Sep) said that in view of the international situation in the last one year, “the United Nations is required to further enhance its role and that the prevailing reality where the principles of respect for sovereignty and sovereign equality are flagrantly violated serves as a serious lesson that true peace and security can be achieved only when the states possess powerful strength of their own.” The North Korean Ambassador also said that more than one year has passed since the adoption of the June 12 DPRK-US Join Statement, however, “the relations between the DPRK and the U.S. have made little progress so far.” Ambassador Song continued, “the situation of the Korean peninsula has not come out of the vicious cycle of increased tension, which is entirely attributable to the political and military provocations perpetrated by the U.S. resorting to the anachronistic hostile policy against the DPRK.” Song also said, “assuming that the U.S. has had enough time to find out a calculation method that can be shared with us, we expressed our willingness to sit with the U.S. for comprehensive discussion of the issues we have deliberated so far.” The North Korean Ambassador reiterated, “it depends on the U.S. whether the DPRK-U.S. negotiations will become a window of opportunity or an occasion that will hasten the crisis.” On the inter-Korean declarations that excited the North, South and the international community a year ago, but now in the standstill, Song said, “it is attributable to the double-dealing behavior of the south Korean authorities who performed the act of “handshake of peace” before the world people, but behind the scene introduce ultra-modern offensive weapons and hold joint military exercises with the U.S. targeting the DPRK.” The Ambassador said that the improvement of inter-Korean relations can only be achieved ”when the south Korean authorities put an end to the big- power worship and the policy of dependence on foreign forces encroaching upon the common interests of the nation and fulfill their responsibility assumed before the nation by implementing the inter-Korean declarations in good faith.” The North Korean Ambassador also reaffirmed his country’s commitment to the 2030 Sustainable Development Goals. --------------------------- For All On-Demand Addresses in English: https://www.youtube.com/playlist?list=PLwoDFQJEq_0be27xZdrtNKq6jFhK4aYnu For All On-Demand Addresses in the Language of the Speaker: http://webtv.un.org/meetings-events/general-assembly/general-debate/74th-session/ #UnitedNations #UNGA #UNGA74

Tijjani Muhammad-Bande, President of the UN General Assembly, addresses the general debate of the 74th Session of the General Assembly of the UN (New York, 24 – 30 September 2019). #UnitedNations #UNGA #UNGA74 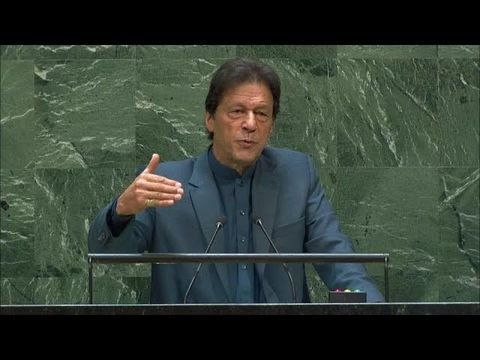 Imran Khan, Prime Minister of the Islamic Republic of Pakistan, addresses the general debate of the 74th Session of the General Assembly of the UN (New York, 24 – 30 September 2019). Prime Minister of Pakistan Imran Khan today warned that what is going to happen in Kashmir when the curfew is lifted