Using the power of water has a long tradition at the location in Blaichach. The more than 100-year-old plant dating from 1907 was taken over by Bosch in 1960 and was extensively modernized and expanded in 2012 due to its great potential. In 2018, the hydropower plant generated 12,200 MWh of renewable electricity and was thus able to cover around 45 percent of the total electricity demand at the site through its own generation.

With all the senses: a “tour of extremes” through Shanghai - EN

In connected systems around the world, billions of tiny Bosch MEMS sensors are improving people’s lives. In smartphones, wearables, and applications for the internet of things, these sensors provide important data; in vehicles, their job is to make driving safer and more relaxed. We join the Bosch a Around the world, Bosch engineers file 19 patent applications every working day. One of them is Gökce Cetin Görbuz from Turkey. Learn more about how the innovations of Bosch inventors make our lives easier, better -- and often safer: http://www.bosch.com/en/com/boschglobal/inventors_for_life/invent 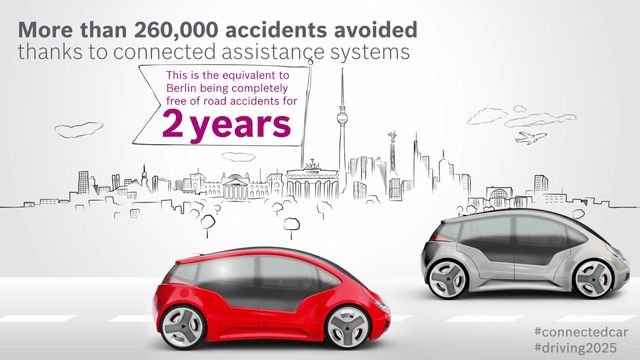 The benefit of connected mobility – The Connected Car Effect 2025

Connected assistance systems will mean fewer accidents, less fuel consumption, less stress. This is the result of a study conducted by Bosch and the consulting firm Prognos.